When American singer-songwriter Joy Villa arrived at the Grammy Awards on Sunday afternoon, she was a vision in silver. 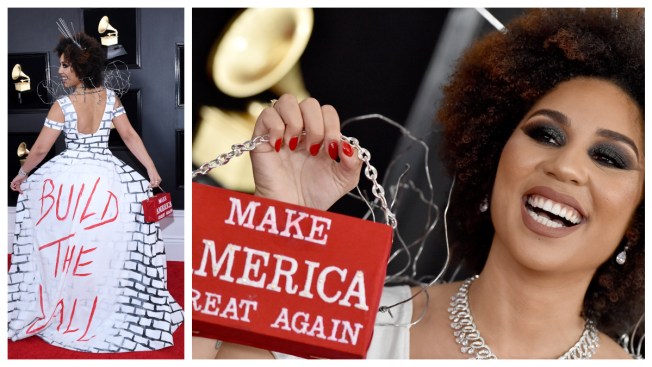 Her floor-length gown was made entirely out of a highly reflective material that mimicked the shine of aluminum foil. A row of metallic spikes adorned the top of her head forming a Lady Liberty-esque crown. Matching chunky jewelry and a collar constructed of what appeared to be barbed wire completed the eye-catching look. 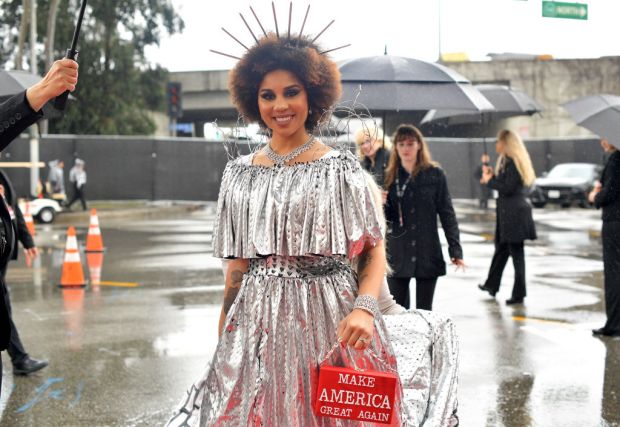 “This is the wall,” Villa, 27, told the Los Angeles Times, gesturing toward the shiny ensemble with her free hand. In the other, she clutched a bright red purse emblazoned with President Donald Trump’s campaign slogan, “Make America Great Again.”

Villa, an outspoken Trump supporter, has become known for using her Grammy looks to make pointed statements. Two years ago, she caused a stir when she donned a striking red, white and blue mermaid gown with Trump’s campaign slogan written in enormous glittery letters down the front. “Trump” was also spelled out in glitter on the dress’s train. In 2018, Villa abandoned the Trump theme in favor of expressing her antiabortion stance, debuting a gown she painted herself that featured a fetus surrounded by colors of the rainbow, according to the Hollywood Reporter.

On this year’s red carpet, Villa made sure there was no confusion about the message behind her attire, which was created by L.A.-based designer Desi Lee Allinger-Nelson of Desi Designs Couture, the Hollywood Reporter wrote. Posing in front of the cameras, Villa tore away the silver gown to reveal a second outfit underneath – a black-and-white dress with a brick design likely inspired by the cover of Pink Floyd’s 1979 album “The Wall.” Three words were scrawled in prominent red lettering on the back of the gown: “Build the Wall.”

“I believe in building the wall to protect our southern border, not to keep people out but to protect the citizens of our country,” Villa told the Times. “I’m part Latina, I’m black and I believe in what the president’s saying. This to me is a representation of that, in a very visual way. … I always make a statement.” 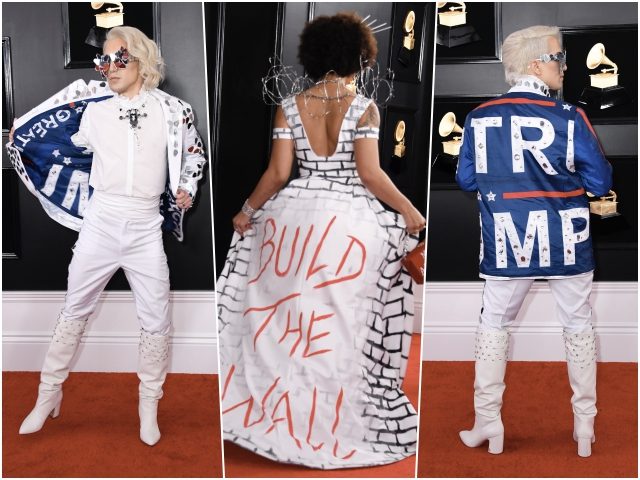 Much like the national conversation surrounding the actual border wall, reactions to Villa’s dress were equally divided. Some praised her as brave and inspirational; others said she was merely seeking attention. Villa, however, wasn’t the only person to show off a pro-Trump outfit on Sunday. Fellow singer Ricky Godinez, who goes by Ricky Rebel, donned a bedazzled red, white and blue Trump 2020 jacket bearing the words, “Keep America Great!”

Allinger-Nelson, the designer, did not respond to a request for comment Sunday night, but shared a “disclaimer” on Instagram about working with Villa.

In a separate post, Allinger-Nelson called the chance to design Villa’s Grammy look an “honor,” writing, “I appreciate the opportunity to make what I love to do and help a client achieve their vision. We are all different and we belong.”

Despite championing the president in recent years, Villa, who was raised conservative, told the Hollywood Reporter that she wasn’t always a fan of Trump.

“When Trump came in the picture, at first I hated him,” said Villa, who attended high school in Santa Barbara and now splits her time between West Hollywood and New York, according to THR. But as she did more research on Trump, Villa said her opinion of him began to change.

“I was a secret Trumper for months,” she said, before publicly displaying her support at music’s biggest night with the “Make America Great Again” dress in 2017. Since then, Villa has not been shy about expressing her political beliefs, even debuting a rock-country song titled “Make America Great Again!” The track appears on her latest album, “Home Sweet Home,” which was released last year.

On Sunday, Villa actively promoted her wall-inspired dress and its message in interviews and on social media, often parroting misleading statistics about illegal immigration that have been repeatedly voiced by Trump and his supporters.

“I don’t care what anyone thinks,” she tweeted. “I 100% support the wall & our President @realDonaldTrump.”She continued: “Do you want more drugs brought in? (70% of heroin is from Mexico) More illegal women getting sexually assaulted (1 in 3 who try to make it in)? More children being trafficked? (Thousands a year) because I DO NOT!”

During his Oval Office address last month, Trump said 90 percent of the heroin in the U.S. comes across the border from Mexico, but did not note that most of it comes through legal points of entry, according to The Washington Post’s Fact Checker. The Fact Checker has also found the sexual-assault statistic to be misleading and reported that the number of children being trafficked is far less than “thousands.”

While some critics seemed certain that Villa’s bold statement would be the end of her career, Sunday’s outfit appeared to have the opposite effect.

Early Monday morning, Villa tweeted that her “Home Sweet Home” album was “climbing” on Amazon Music’s Top 100 paid albums chart, noting that it was at No. 79. Hours later, the album had moved up to No. 46. After her 2017 Grammys stunt, Villa’s music also shot to the top of the charts. In March 2017, less than a month after the awards show, her then-two-year-old EP “I Make the Static” spent one week at No. 1 on Billboard’s Top Rock Album chart. It also reached the No. 12 spot on the Billboard 200 chart.

“I grew up in theater, so I’ve always used costume as a way to express myself,” Villa told THR. “It’s an opportunity to show the world who I am on the red carpet, which to me is the same as a stage. I approach it as a show. I want to ‘wow’ people. My heroes on the red carpet have always been Cher, Madonna, the wild ones; the worst dressed. Or Lady Gaga with the meat dress. Who even talks about the best dressed? No one even remembers who was best-dressed last year!”

AngloGold to pour first gold at Obuasi mine by year end