“Sir, sir, sir,” scream more than 30 children in exhilaration, jumping out of their small wooden chairs in a classroom on the edge of a lush, grassy valley.

The race is on at Berekuso Junior High School on the outskirts of Accra, Ghana’s capital, to see who can connect a series of wires and transistors to make a tiny buzzer squeal. 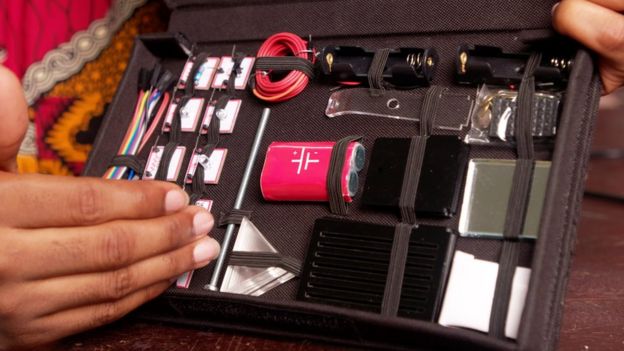 The science kit only costs $15

Within seconds the room is accosted with dozens of high pitched buzzing sounds. The children are wild with excitement. It’s impossible to tell who has won.

A year ago, these teenagers were being taught electronics with a black board, chalk and a smattering of books. Now they have everything they need in front of them to build their own circuits.

Charles Ofori Antipem, 25, is behind all this.

He created a science set, a small black box the size and price (at $15) of a textbook packed with electrical kit.

“Being able to put the sets on the desks of the students and see that glow in their eyes when they build that first electrical circuit,” he says. “That is what keeps us going.”

Charles set up his company Dext Technology 18 months ago. He now has nine members of staff, and has so far sold more than 5,000 sets to government and private schools across Ghana.

The idea started with his roommate, Michael Asante Afrifa, in their dorm room at university. They want every child in Ghana to have access to one in the next two years.

“Getting the knowledge from the book is one thing but being able to experience it with experimentation is what is really important,” he says. 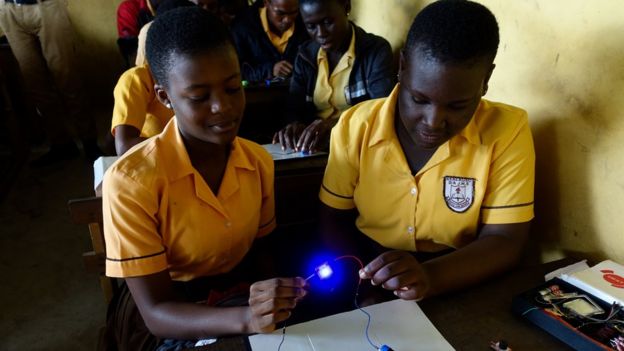 It’s expected that the 2020s are going to be a decade of redeployment into jobs requiring some sort of STEM (Science, Technology, Engineering and Mathematics) qualification. No one really knows how many of the world’s jobs will morph into those requiring these new skill-sets but estimates put it at around 80%.

But sub-Saharan Africa is massively lagging behind in terms of its investment in STEM education and training. As a region on its own, the UN states it will need 2.5 million engineers alone just to meet its sustainable development goal (SDG) of improving access to clean water and sanitation.

Dr Thomas Tagoe, a member of the Ghana Science Association, says instilling in children a love of science is particularly important as the country does not have enough engineers and IT specialists.

“It’s a digital age and we need the persons who can take advantage of it,” he says.

“It means we could move away from being a developing country to a place that’s really known for its expertise in science.”

Charles grew up in a house where science ruled. His dad, who died a few years ago, taught science in the local school.

“He always wanted us to consume every bit of knowledge we could find, especially things related to science.”

But Charles had no access to the internet or even basic science and technology equipment when he was at school. “The limits were the tools that I had in my hands,” he says, adding that he wants to change that for today’s school children.

“I feel like my job should be to do as much as I can to empower the next generation even more than I was empowered by my dad, so that they can take on the big challenges that are going to come.”

Six hours north west of Berekuso, in a small workshop in a tech hub in the city of Kumasi, Charles’ team is busy putting together the science sets.

They are welding thousands of tiny conductors onto miniature resistors.

“Ok, this is it,” says Charles with pride holding up the small black box. He points out the manual, the electronic components, the iron filings for electromagnetism, the light box, the mirrors and then in the middle, the batteries that power it all.

Charles has a scheduled call from a potential client who wants to introduce the science sets into schools in cocoa-growing communities in neighbouring Ivory Coast.

He’s a passionate salesman, answering every question with ease. As he ends the call a smile creeps onto his face. “It went well,” he says, explaining they have agreed to buy a few trial sets.

“That could lead to more orders of sets or an investment in the science sets,” he says.

Back in Berekuso on a dusty road a few kilometres away from the school, 15-year-old Princess Makafui sits with her school friends doing her homework.

Her family are squatters in a house that was never finished. It doesn’t have all its walls let alone electricity. The sun has already set and they are working from a single light, placed in the middle of the table, that they invented themselves.

“It’s a light cube,” Princess says proudly. “It means we can all use a side of the cube to see our homework.” Princess and her team of 12 teenage girls won a regional science competition for their invention. They created it using the science set.

“Before the science sets, our science classes were very boring. We weren’t understanding science because everything was in theory,” she says.

For Charles, the idea that he is creating a new generation of inventors, is everything he could have hoped for.

“Seeing students coming up with innovations with their science sets is exactly the point we’ve been trying to prove.

“When you give students access to the tools they will begin to find solutions to problems around them using that knowledge.”

An inventor creating inventors? “That sounds good,” he says, beaming. “If my dad were here he would be absolutely proud.”

A Ghanaian 'Housegirl' navigates a complex maze of culture and class

COVID-19 response demands better use of science and technology