Women in West Africa who accuse men of sexual abuse have recently seen some change, but also an intense backlash — including threats and even a police investigation.

It was, she said, a secret that burned so badly she could no longer keep it inside. So at age 34, Busola Dakolo, a well-known Nigerian photographer, went on television and finally spoke.

She said she had been raped twice as a teenager by her former pastor, Biodun Fatoyinbo, a church leader whose services draw thousands, and whose fans, admiring his flashy lifestyle, have taken to calling him “the Gucci pastor.” He has denied the allegations.

After years in which silence around rape and sexual harassment have been the norm, West Africa is seeing a wave of #MeToo proclamations.

Accusations have come from a Gambian beauty queen who said the former president raped her; a former presidential adviser in Sierra Leone who said she was sexually assaulted by a church leader; and a Nigerian journalist with the BBC who captured hidden camera footage of university professors soliciting sex in exchange for admission and grades.

The footage shook the region, drew outrage from political leaders and led to the suspension of at least four lecturers.

But many women who have come forward in recent months have also experienced a fierce backlash, including attacks on their reputations and accusations that they’ve lied about the assaults. While their critics say they are merely applying appropriate skepticism to unproven allegations, their supporters say that the hostile reaction reveals just how difficult it is for women in the region to speak out about abuse.

The backlash has hit women in many countries, including Europe and the United States. But survivors in West Africa say they feel a particularly immense fear — of shaming their families, of scaring off potential husbands, of taking on the region’s most powerful institutions.

“Everything,” said Ms. Dakolo, “still revolves around protecting these men.”

Ms. Dakolo’s allegation against the pastor prompted a visit from Nigerian police, who told her she was being investigated in a case of criminal conspiracy. A few weeks later, the pastor returned to his pulpit, amid cheers from his congregation and support from a group calling itself the Social Justice League.Mr. Fatoyinbo said on Instagram that many people have used similar accusations to try to extort him and the ministry. “I have never in my life raped anybody even as an unbeliever,” wrote Mr. Fatoyinbo, who declined multiple interview requests.

In an interview at her home in Lagos, Ms. Dakolo said she had come forward after she and her husband, a well-known pop star, heard that the pastor had continued to assault other congregants.

But the personal cost, she added, had been high, and had included telephone threats, internet harassment and an extremely difficult discussion about rape with her three children.

“You begin to ask yourself, ” she said, “did I do the right thing?”

Religion is an overwhelming force in Nigeria, a country of nearly 200 million people that is roughly split between Christians and Muslims. Billboards for famous pastors dot the highways, an annual redemption camp attracts millions of people, and some preachers are more visible than political leaders.

In recent years, Mr. Fatoyinbo has grown his ministry, the Commonwealth of Zion Assembly, into a five-city force among the country’s many Pentecostal megachurches.

Young and tech-savvy, he preaches an increasingly popular theology called prosperity gospel that posits that success can be achieved through faith and donations to church.

Congregants enter his sanctuary on a red carpet and follow his adventures — his birthday party on a yacht in Dubai, for example — in the news.

But Ms. Dakolo met him nearly two decades ago, in the midsize city of Ilorin, when he was an up-and-coming star and she was still a teenager.

He soon became her spiritual mentor, complimenting her singing and visiting her home to counsel her. When she was 17, the pastor raped her, she said, once at her childhood home and once on a desolate roadside. Devastated, Ms. Dakolo said she soon told her sister and brother, and then confronted Mr. Fatoyinbo.

He apologized to her, she said, blaming his behavior on the devil.

Ms. Dakolo’s video interview in June with journalist Chude Jideonwo, in which she first accused Mr. Fatoyinbo, has been viewed at least half a million times on YouTube. Her allegations inspired a protest outside the church and forced the pastor to take a temporary leave.

Strangers soon flooded her social media inboxes with their own stories of assault, and a second woman came forward and told Mr. Jideonwo that the pastor had raped her while she was caring for his children. (The woman chose to obscure her face in the video interview.)

But Ms. Dakolo soon found herself under heavy suspicion.

Local newspapers carried a statement from the Social Justice League accusing Ms. Dakolo of being a tool of jealous church leaders eager to smear Mr. Fatoyinbo.

When Ms. Dakolo sued him for emotional distress, his legal team responded by demanding she pay him 50 million naira in damages, about $140,000, on the basis that her suit constitutes an abuse of judicial process. The case is pending.

The Pentecostal Fellowship of Nigeria, an influential umbrella organization, promised a thorough investigation into the matter, but closed the inquiry when the pastor failed to appear for questioning.

A representative of the group, Simbo Olorunfemi, said that it “does not and will not condone” sexual assault, but that Mr. Fatoyinbo’s lack of cooperation had left the group with nothing else it could do.

In about two dozen interviews across Lagos and Abuja, the country’s biggest cities, some people defended Ms. Dakolo.

“He has to be punished,” said Biba Bukola, 19. “Even if he’s a pastor. So that other people will learn the lesson.”

But many doubted her account. Even some women who had experienced sexual assault had little sympathy.

Of three women who said in interviews that they had been raped, two of them sided with Mr. Fatoyinbo, saying that if she had been assaulted, she was at least partly to blame.“She was old enough to know to fight back,” said one woman, a 25-year-old teacher who did not want to be named because she said she had also survived sexual abuse.

Many people trace Nigeria’s MeToo movement to February, when a young pharmacist in the country’s conservative north took to Twitter to describe an encounter in which she said her boyfriend nearly killed her.

Stories of abuse soon flew around the internet, many of them tagged #ArewaMeToo. (Arewa refers to the north in Hausa.) Ms. Dakolo came out a few months later.

Then, in October, the BBC aired a report exposing sexual harassment by professors at prominent universities in Nigeria and Ghana. One professor was shown on video pledging to help a young woman gain admission to the University of Lagos, unaware she was a reporter under cover. He then locked the door to his office, turned out the lights and groped her. He also told her that women students are accustomed to “paying for it” with their bodies.

The footage prompted social media outrage (#sexforgrades) and a swift political response. Within days, the Nigerian legislature had introduced a bill outlawing sexual advances by professors, and the president had pledged his support.

Kiki Mordi, the BBC journalist, said that the report was so effective because, for the first time, people could see abuse “through the eyes of the victim.”

Ms. Dakolo said she was glad to see the BBC investigation receive so much attention. But she was frustrated that people seemed to need to see a man caught on video to take an allegation seriously.

Most women don’t have that kind of evidence, she said.

Pastor Busola Olotu, the leader of a woman’s ministry in Ilorin who was once a mentor to Mr. Fatoyinbo, said that she had spoken with three other women who told her they had been sexually assaulted by Mr. Fatoyinbo. None have spoken publicly; all declined requests to be interviewed.

On a recent Sunday, congregants streamed into Mr. Fatoyinbo’s church in Abuja, passing the red carpet, the velvet stanchions, the police officers in khaki and the greeters in pencil skirts.

The pastor had recently returned from leave.

“Celebrate you,” the greeters told churchgoers, smiling as everyone took their seats.

Thousands, watched as Mr. Fatoyinbo took the stage. He wore a blue three-piece suit and preached about the importance of resisting “anything the enemy is dangling before you.” Even sinners, he said, can later decide to walk through the right doors.

Outside, as afternoon clouds rolled in, some said the pastor could do no wrong. “He didn’t do it,” said Georgina Inah, 27, who was just finishing her time in Nigeria’s youth service corps. Of Ms. Dakolo, she said, “she’s confused.”

Others conceded that a sexual encounter might have happened, but urged Ms. Dakolo to move on. After all, they said, the pastor had gone on to do so much good.

“Forgive and forget,” said Stephen Yakubu, 52, “Is that not what God says?”

US tourism & leisure industry sees a drop of 7.7% in deal activity in September 2019 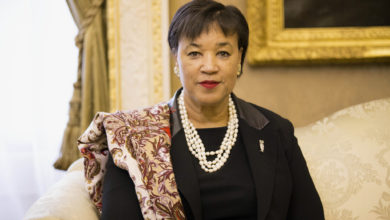