There was a nod to the glory of the past before the Kop paid homage to the thrill of the present.

With the points secure and Liverpool cruising to an ultimately routine 2-0 victory over Newcastle United, Rafa Benitez’s name echoed around Anfield.

The Spaniard is always welcomed back with open arms. He gave a generation of supporters the greatest night of their lives in Istanbul and served the Reds with distinction.

There was no happy return for Benitez this time – a first defeat in six managerial meetings with the Reds. 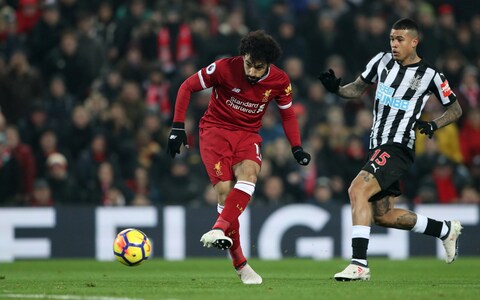 But the outpouring of emotion showed Jurgen Klopp the kind of iconic status that awaits him if he can follow in his footsteps and deliver the biggest of prizes.

The signs are promising. Two-and-a-half years of hard graft and shrewd transfer business has enabled Klopp to establish the perfect platform.

Liverpool sit second in the Premier League and on the brink of qualifying for the quarter-finals of the Champions League for the first time since Benitez’s reign.

Belief is growing – this is a team which has evolved and improved in all departments. Increasingly, they can be trusted to deliver.

The Reds were far from their fluent best on a bitterly cold night against Newcastle, but there was something satisfying about the sight of them winning without getting out of second gear.

There was no hint of panic as they battled for 40 minutes to find a way through the black and white wall in front of them.

They stuck to the task and got their reward when Mohamed Salah tucked away Alex Oxlade-Chamberlain’s pass. His 32nd goal of a remarkable season puts him level with Harry Kane in the race for the Golden Boot.

Salah is now just one behind Fernando Torres’ best ever haul for Liverpool and four adrift of Robbie Fowler. The record books are being re-written on a weekly basis as Kopites are treated to the sight of a genius operating at the peak of his powers.

Barring injury, Salah looks destined to become the first Reds player since Ian Rush in 1986/87 to reach the 40-goal mark.

Defenders are on the receiving end of so much punishment from him that referees have now started giving them the sympathy vote.

Graham Scott produced a strong contender for worst decision of the season when he turned a blind eye to Newcastle skipper Jamaal Lascelles blatantly shoving Salah over after he had raced clear late on.

It mattered little to the outcome. Sadio Mane had already killed off the Magpies early in the second half with the 200th league goal of Klopp’s tenure. The re-energised Senegal international’s 14th of the campaign means he has already surpassed his tally for last term.

The tone was set from the opening exchanges as Newcastle defended in numbers and Liverpool took up residency in their half.

Klopp’s men enjoyed 75% possession in the opening 45 minutes but prior to Salah’s opener they did precious little with it.

Few managers in world football can organised a backline as well as Benitez. Newcastle’s discipline ensured there was precious little space for the Reds to operate in.

Patience was required both in the stands and on the field as Liverpool huffed and puffed in search of a breakthrough.

They didn’t play poorly and there was no shortage of desire but too often moments of promise came to nothing as their final ball let them down. Roberto Firmino scuffed wide before Salah hammered Andy Robertson’s cross straight at Paul Dummett.

Jordan Henderson looked fit and fresh on his return to the midfield in place of James Milner as he snapped into tackles and kept the Reds driving forward. In front of him the impressive Oxlade-Chamberlain built on his fine display against West Ham.

Salah went for the spectacular with a dipping volley when he latched on to Emre Can’s lofted pass and nearly caught Martin Dubravka out at his near post.

Henderson and Oxlade-Chamberlain repeatedly switched play in a bid to stretch Newcastle and Firmino dropped off into midfield to make a nuisance of himself.

Lovren, who was recalled in place of Joel Matip, looked composed and confident alongside Van Dijk, whose pin-point distribution once again caught the eye.

Lovren saw his header from Salah’s corner pushed away by Dubravka and Mikel Merino blocked his attempts to put away the rebound. 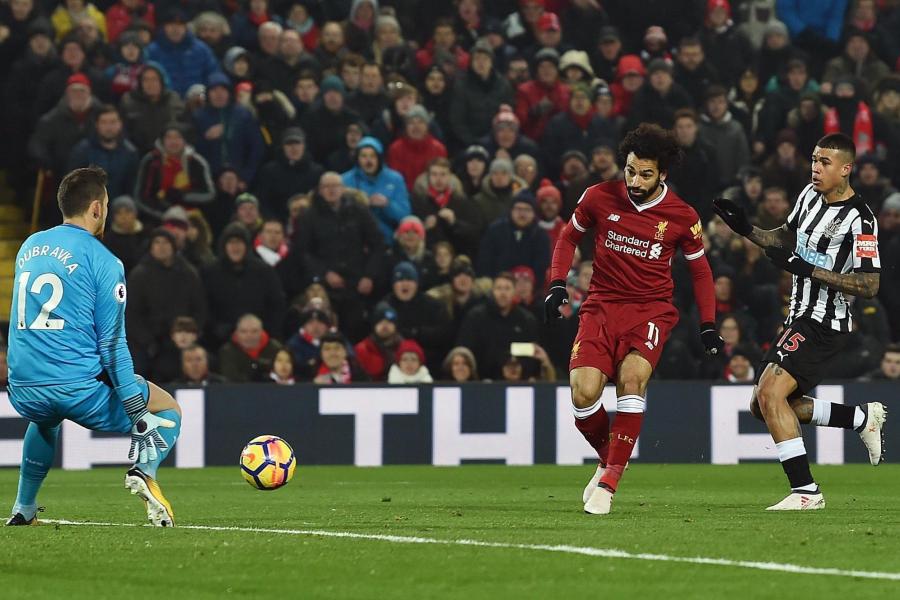 Liverpool were at their most dangerous when their pressing rattled Benitez’s side. Can picked Deandre Yedlin’s pocket and Firmino played in Salah, but he delayed the finish and Newcastle survived.

Liverpool were in need of some inspiration and it arrived five minutes before the break.

Oxlade-Camberlain was the creator as he latched on to a loose ball and drove forward with real power and purpose.

Salah darted into space and the England international found him. The Egyptian controlled with his right and slotted it between the keeper’s legs with his lethal left foot.

The biggest threat to Loris Karius for most of the night was frostbite as he stood watching the action unfold.

However, on the cusp of half-time the German keeper was called into action as he expertly tipped behind Mohamed Diame’s strike at full stretch. It was testament to Karius’ concentration levels as well as his agility.

Ten minutes into the second half Liverpool had breathing space. It was a slick team move which Mane started and finished.

Can and Firmino were also involved as the Brazilian flicked the ball through to Mane, who darted between Dummett and Florian Lejeune and hammered into the bottom corner.

Klopp fumed on the touchline when the Reds got too casual and briefly allowed the visitors to gain a foothold, but the introduction of Adam Lallana and Milner saw them quickly regain control.

Klopp couldn’t hide his disgust at the sight of Lascelles getting away with cynically bringing down Salah before he could pull the trigger in stoppage time.

But the job had already been done. If Manchester City beat Chelsea on Sunday, Klopp’s side will be seven points clear of the fifth placed Londoners.