The Gold Coast Commonwealth Games have got off to a bright, toe-tapping start thanks to an opening ceremony filled with colour and depth, but greater challenges await the 2018 ‘Friendly Games’.

With the build-up so stymied by sporting scandals in completely unrelated codes, the event — featuring 71 nations and territories, and more than 4,000 athletes — has practically come in unannounced, much like the floating whale that signalled the conclusion of Wednesday night’s ceremony.

But much like how that whale captivated Carrara Stadium, and how rains nearly killed the audience’s enthusiasm before clearing up in the nick of time, organisers will be hoping the Commonwealth Games can do the same with Australian viewers.

A number of challenges face the games for the next 11 days.

Tampering with the hype

Cricket hasn’t been played at the Commonwealth Games since 1998, but it has had a far-reaching effect on the event this time round.

The ball-tampering scandal that rocked Australian cricket has seen sport bulletins nation-wide inundated with news surrounding the futures of Steve Smith, Cameron Bancroft and David Warner, and not, instead, on Sally Pearson, Liz Cambage or Emma McKeon.

The build-up to the event has been effectively muted by sport’s biggest scandal of the year sitting right on Gold Coast 2018’s calendarial door stop.

With obstacles, however, come opportunity, and the appetite for a convincing, good-news sport story will be high, with cricket now off-season and left to fester in its own pity for a few months.

With plenty of gold medals on offer as usual for Australia at a Commonwealth Games, the chance for a new star to rise and give hope towards Tokyo 2020 could breathe added life into the event.

That is, of course, assuming the weather holds up.

Journalists were sent scampering from the media tribune as the light drizzle became a laptop-destroying downpour, just two minutes before the ceremony proper kicked off.

Just as the MC looked to engineer some hype with the 10-second countdown, the deluge hit the handbrake, became a drizzle, then a spit.

The countdown finished, and with the show rumbling in to life, the ombrophobic media types hurried back just in time to grab their choice vantagepoints.

Cyclone Iris, having regenerated off the north Queensland coast, is hundreds upon hundreds of kilometres north of the games, but wind gusts and wet weather are still expected throughout the event.

With the right roll of the weather dice, it will prove to be nothing more than the odd shower on Queensland’s southern border for the 11 days of competition, hopefully keeping up the veneer of ‘beautiful one day, perfect the next’ Queensland to international audiences.

Anyone who follows the (mis)fortunes of the Gold Coast Suns or the Titans knows that attracting a crowd in this part of the world is a tough task at the best of times.

This “once in a lifetime opportunity”, as the authorities keep reminding punters, would surely qualify as the best of times, and yet last-ditch pleas to the public are still being made, imploring punters to fork out some cash and bring their families to the games.

Some 140,000 tickets were still floating about on the day of opening ceremony, with organisers in Townsville and Cairns still looking to sell thousands of tickets for preliminary basketball matches. The lack of take-up (so far) is worrying for organisers, who timed the event to be during the Easter school holidays with Government ministers noting that tickets were available as cheap as $10 for some events.

In one of the opening ceremony’s truly gorgeous scenes, Carrara Stadium watched transfixed as the narrator held Earth in his hand, standing amid a galaxy of stars.

But it’s stars on the track that Gold Coast 2018 is missing, with a host of international drawcards ruled out prior to the start of competition.

As far as organisers were concerned, Usain Bolt’s retirement last year could not have been more ill timed, while the likes of Asafa Powell, Andre de Grasse and Wayde van Niekerk are among a host of big names not making it down under.

The real international drawcards tend towards the other side of the gender divide, with sprint star Elaine Thompson leading the athletics line alongside South Africa’s Caster Semenya and Bahamas’ Shaunae Miller-Uibo — she of diving-for-the-Rio-finish-line fame. 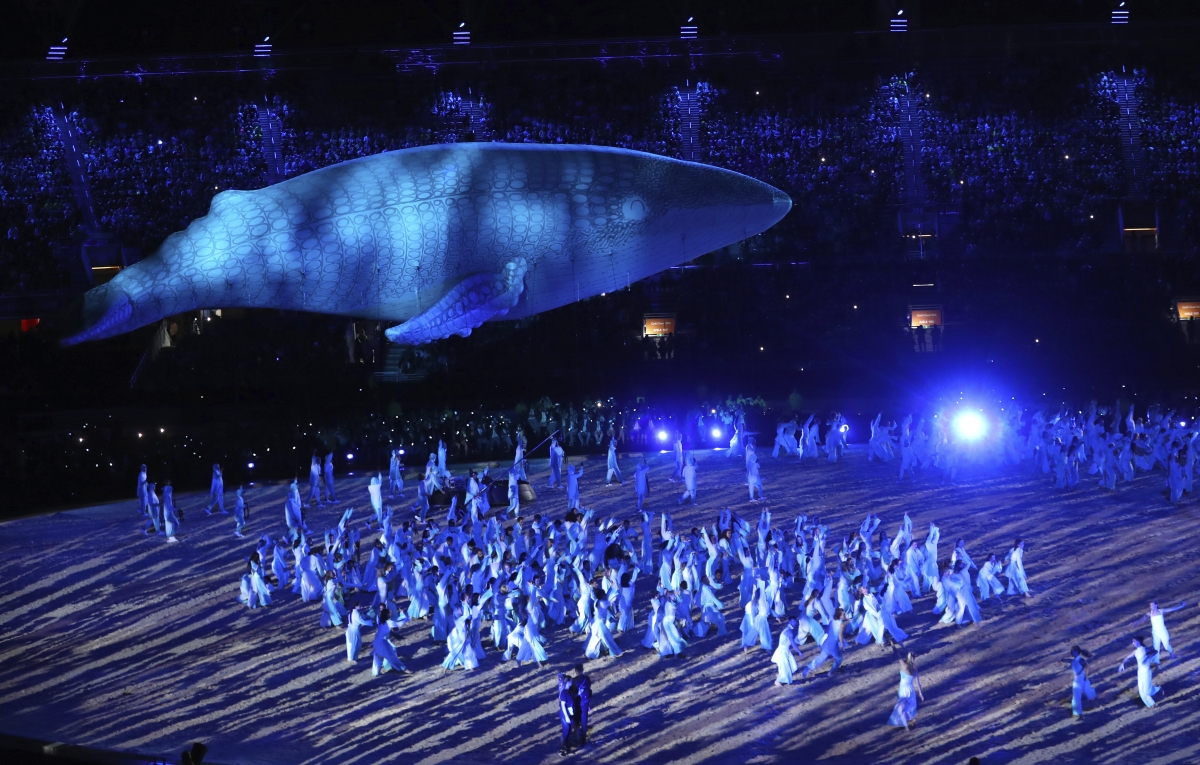 That’s not to say the Australians can’t pull their own weight in this regard, with the usual Commonwealth Games gold rush anticipated.

One thing left to find out is whether Australia can retake its crown atop the medal tally, where it was deposed for the first time in living memory by England in the 2014 Glasgow games.