Landlocked Zambia in Africa is facing a debt crisis. It’s a typical story. During years of booming copper prices, the Zambian economy boomed. But when copper prices started falling in 2011, Zambia borrowed to stimulate the economy and maintain growth impulses. Money was spent on vanity projects and infrastructure investments, with project costs routinely inflated. 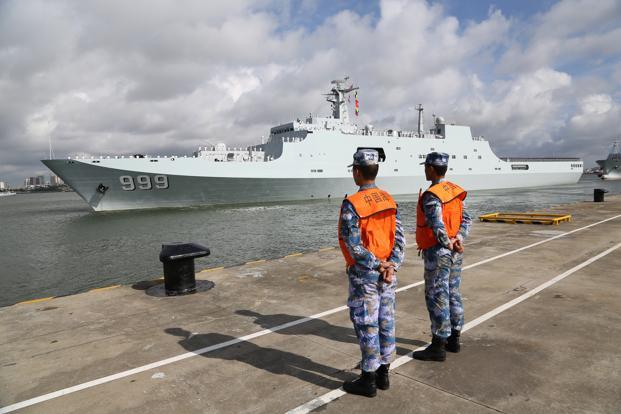 Chinese naval base in Djibouti has upset the region’s security equilibrium, with a special impact on the US and its allies, all of whom have military bases in the area. Photo: AP

When judgement day came, as it usually does, the Zambian government approached the International Monetary Fund (IMF) for a bail-out. The institution had earlier warned Zambia about ballooning debt and suggested a halt on fresh borrowings. Negotiations were called off after IMF was not convinced of Zambia’s seriousness. The IMF issued a stern press release: “…the latest borrowing plans provided by the authorities continue to compromise the country’s debt sustainability and risk undermining its macroeconomic stability…future program discussions can only take place once Zambian authorities implement credible measures that ensure debt contraction is consistent with a key program objective of stabilizing debt dynamics and putting them on a declining trend in the medium term.”

China has walked into that breach. In fact, China has been picking up debt wherever IMF or other multilateral agencies are unable to provide a lifeline. While exact data is hard to come by, it is believed that China now owns anywhere between one-quarter to one-third of Zambia’s external debt. There’s one crucial difference between IMF and China: while the multilateral agency has been using conventional methodology to approach the problem, China has been providing debt relief against the security of state infrastructure assets. In Zambia, for example, there is apprehension that China has established ownership over state power utility Zesco.

This template is being repeated across countries. In Djibouti, China has established its first overseas naval base (with estimated capacity to house 10,000 troops), which has translated into other collateral projects with Chinese investments: a free-trade zone, financing of a multipurpose port project, a $4-billion gas project, international airports and a key railway line.

In South Africa, there is consternation among civil society that president Cyril Ramaphosa might have handed over a key special economic zone to Chinese developers and a besieged power utility to China Development Bank (CDB). According to a paper from China-Africa Research Initiative (CARI) at Johns Hopkins School of Advanced International Studies, Republic of Congo’s indeterminate debt situation forced its president to visit Beijing to obtain a precise picture of their indebtedness.

In a recent article (bit.ly/2P4s9Eg), Obadiah Malafia, former deputy governor of the Central Bank of Nigeria, has written: “It is only now becoming apparent that the little prints in Chinese loan agreements collateralise key domestic assets in the event that the indebted country is unable to pay back its loans.” Closer home, the debt-for-equity swap in Sri Lanka’s Hambantota port, or Malaysia’s recent cancellation of two Chinese projects out of fears of a debt-trap, has raised red flags over China’s economic diplomacy through the instrument of collateralised debt.

Fears of China’s debt-trap diplomacy gained fresh currency after the recent triennial Forum on China Africa Cooperation in which Chinese President Xi Jinping committed $60 billion of fresh funding for Africa, with a special focus on financing construction of railways across the continent. Observers see this as an example of China combining its excess foreign exchange reserves with spare domestic industrial capacity to further the Belt-Road project.

There is, of course, a likelihood that some of these anxieties might be over-wrought.

For example, the Chinese naval base in Djibouti has upset the region’s security equilibrium, with a special impact on the US and its allies, all of whom have military bases in the area. The panic might have also been triggered by China’s first overseas military exercise there.

It is also likely that unease over the Chinese challenge to Western global economic hegemony has created the bogey of debt-trap diplomacy. The CARI paper (bit.ly/2MSdy10) surveys 17 African nations with high possibility of debt risk due to fluctuating commodity prices. The study shows that apart from three countries (Zambia, Republic of Congo and Djibouti), where Chinese loans could be a significant contributor to debt distress, the other countries have insignificant Chinese debt.

It will be interesting to see India’s strategy in the midst of these competing models. In Africa, India clearly lags behind both China and the Western powers. It is unable to match the volume of dollars both sides bring to table.

India’s competitive advantage of capacity building is also somewhat blunted when compared with the volume of Chinese investment in African manufacturing along with supply of trained manpower. India’s chief strength is soft power but its ability to endure financial competition remains doubtful.

In the meantime, India’s trade deficit with China continues to widen—$63 billion during 2017-18, against $51.11 billion in 2016-17—as does its dependence on cheap credit for capital goods.

Meanwhile, defaults on some past Chinese loans have already come back to haunt India Inc, especially for infrastructure projects. India must ensure it does not slide from wannabe competitor to willing victim.

Who is this 25-year-old Ghanaian superstar on Southampton’s radar? All you need to know