But his divisive words preceded him, large protests greeted him and biting political attacks soon followed.

The president and first lady Melania Trump flew to El Paso, Texas, late in the day after visiting the Dayton hospital where many of the victims of Sunday’s attack in that city were treated. The president was kept out of view of the reporters travelling with him, but White House Press Secretary Stephanie Grisham said the couple met with the wounded and their families and discussed the shooting. 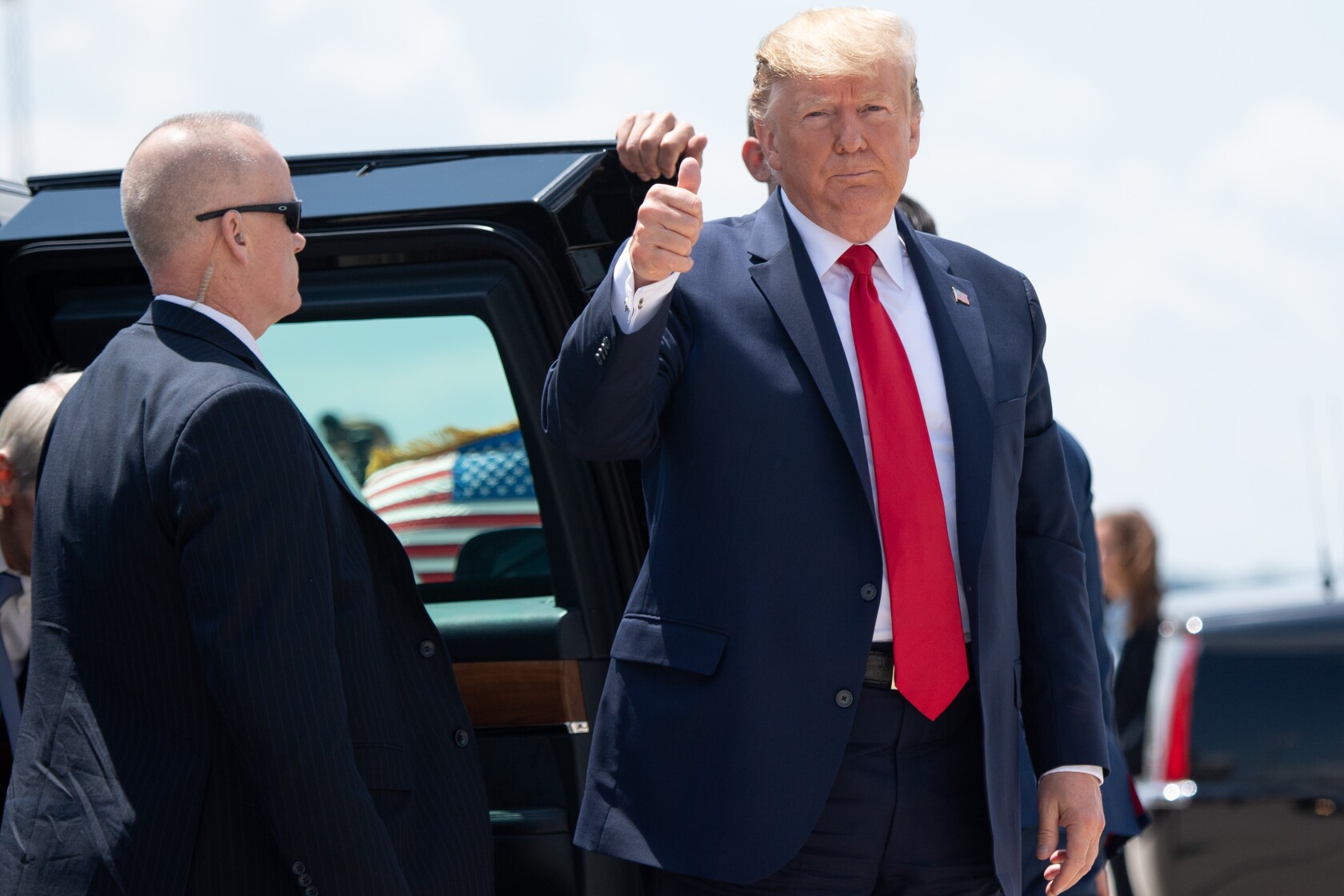 Trump told them he was “with them,” she said. He also met with law enforcement and hospital staff.

But outside Miami Valley Hospital, at least 200 protesters gathered, blaming Trump’s incendiary rhetoric for inflaming political and racial tensions in the country and demanding action on gun control. Some said Trump was not welcome in their city. There were Trump supporters, as well.

Emotions are still raw in the aftermath of the early Sunday morning shooting rampage that left 10 dead, including the gunman, in the city’s popular Oregon entertainment district. Critics contend Trump’s own words have contributed to a combustible climate that has spawned violence in cities including El Paso, where another shooter killed 22 people over the weekend.

Trump rejected that assertion as he left the White House, dismissing those who say he bears some responsibility for the nation’s divisions.

“My critics are political people,” Trump said, noting the apparent political leanings of the shooter in the Dayton killings. He also defended his rhetoric on issues including immigration, claiming instead that he “brings people together.”

Some 85 per cent of US adults believe the tone and nature of political debate has become more negative, with a majority saying Trump has changed things for the worse, according to recent Pew Research Centre polling.

And more than three quarters, 78 per cent, say that elected officials who use heated or aggressive language to talk about certain people or groups make violence against those people more likely.

In Dayton, raw anger and pain were on display as protesters chanted “Ban those guns” and “Do something!” during Trump’s visit.

Holding a sign that said “Not Welcome Here,” Lynnell Graham said she thinks Trump’s response to the shootings has been insincere.

Dorothee Bouquet, stood in the bright sun with her 5-year-old daughter and 2-year-old son, tucked in a stroller. She told them they were going to a protest “to tell grownups to make better rules.”

But in El Paso, where more protests were expected, Raul Melendez, whose father- in-law, David Johnson, was killed in Saturday’s shooting, said the most appropriate thing Trump could do was to meet with relatives of the victims.

“It shows that he actually cares, if he talks to individual families,” said Melendez, who credits Johnson with helping his 9-year-old daughter survive the attack by pushing her under a counter.

Melendez, an Army veteran and the son of Mexican immigrants, said he holds only the shooter responsible for the attack.

“That person had the intent to hurt people, he already had it,” he said. “No one’s words would have triggered that.”

“I think the victims and the first responders were grateful that the president of the United States came to Dayton,” added Mayor Nan Whaley, who said she was glad Trump had not stopped at the site of the shooting.

“A lot of the time his talk can be very divisive, and that’s the last thing we need in Dayton,” she said.

Grisham, responding on Twitter from aboard Air Force One, sad it was “genuinely sad” to see the lawmakers “immediately hold such a dishonest press conference in the name of partisan politics.”

Visits to the sites of mass shootings have become a regular pilgrimage for recent president, but Trump, who has sometimes struggled to project empathy during moments of national tragedy, has stirred unusual backlash.

Though he has been able to summon soothing words and connect one-on-one with victims, he often quickly lapses into divisive tweets and statements – just recently painting immigrants as “invaders,” suggesting four Democratic congresswoman of colour should “go back” to their home countries even though they’re US citizens and deriding majority-black Baltimore as a rat-infested hell-hole.

Even on the eve of his trip, Trump was lashing out at a potential 2020 rival, former Representative Beto O’Rourke, who had tweeted that Trump “helped create the hatred that made Saturday’s tragedy possible” and “should not come to El Paso.”

O’Rourke “should respect the victims & law enforcement – & be quiet!” Trump snapped back.

And on his flight between one scene of tragedy and the second, Trump said he turned in as another 2020 rival, former Vice President Joe Biden, excoriated him in a speech that slammed him as incapable of offering the moral leadership that has defined the presidency for generations and “fueling a literal carnage” in America.

Trump declared the speech “Sooo Boring!” and warned that, “The LameStream Media will die in the ratings and clicks” if Biden wins.