The Executive Director of the World Federation of Science Journalists (WFSJ) joined us at the beginning of September. We asked Christophe Bourillon for his views after two months at the helm of the organisation. What are its challenges and how he envisages the future development of the Federation?

Eric Lauwers (EL): You have been the Federation’s Executive Director for a few weeks now. What are your first impressions of the WFSJ so far?

Christophe Bourillon (CB): The Federation is a fantastic global organisation and it is the 10,000 journalists that make our network worldwide that ARE the WFSJ. We are their collective Voice and as it happens, our community has a good story to tell. Our members are enthusiastic and eager for the organisation to move forward, develop new activities, grow as well as change. The Federation has an extraordinary potential, especially now when the interconnections between science, journalists, communicators, decision makers and the public are such a sensitive topic.

The Federation and what we represent do opens doors: I went to Brussels from 15-18 October where I had a series of high-level meetings with European Union decision makers such as members of the European Parliament and senior staffers of the European Commission President. They welcomed our information on the reality of science journalists – the ethics, high reporting standards and checking of facts. We also discussed initiatives to promote and assist the development of science journalism generally.

EL: What are the most pressing issues and challenges for the Federation, science journalism, and the work with our member associations?

CB: In the world of international organisations, the WFSJ was created in 2002 and is therefore still very new. Our objectives and efforts have mainly been directed towards assisting the community: organising workshops, training, toolkits, etc. It is important for the head office to connect better with our members as well as develop the membership further. Today, we represent 59 Member Associations in approximately 50 countries. There are more than 200 members at the United Nations, there is indeed a real potential to grow our membership.

We are a federation of associations who themselves represent individual members. We should consider opening and diversifying our membership, to corporate members such as media organisations for instance. This would benefit the Federation and create bridges and opportunities for science journalists too.

EL: What will be the focus of the WFSJ Office in the next coming months?

CB: As soon as I was appointed, I launched an organisation audit, I held one-to-one conversations with board members and with other key individuals. On that basis, I am now developing a vision and a strategy with medium and long-term objectives, a clear plan of actions, deliverables, resources and timetable, that I will submit to the Board for approval early 2019.

The program should be rolled out during the first months of 2019. Meanwhile, work at the office is still ongoing, developing workshops, webinars, prizes and other projects.

EL: How about activities for and with the members?

CB: On a personal level, I want to connect and meet with as many Members as possible. Our members from Ghana organized a one-hour Questions & Answers session with me on WhatsApp. I would like to replicate this exercise with as many Member Associations as possible because this allowed a deeper understanding of our members’ daily reality.

One of the key roles of the Federation is to nurture and sustain our global network, not only between the head office and the membership but, more importantly, between Members across borders and continents. We ought to produce our own world directory of members as well as a directory of science journalist courses, schools and fellowships worldwide.

We will also look into promoting science communication in languages other than just English and develop region-specific activities. The reality and needs of science journalists are not the same in Africa or in Europe.

EL: With regards to the leadership of the Federation, what are the differences between your role as Executive Director and the role of our President?

CB: Under the guidance of our President and Board of Directors, the Executive Director is responsible for leading and running the Federation’s day-to-day activities. Put simply, the Executive Director proposes strategies and activities, the President and the Board decide on these long-term objectives. I will lead the secretariat in implementing the work programme, we will report back to the board and so on. 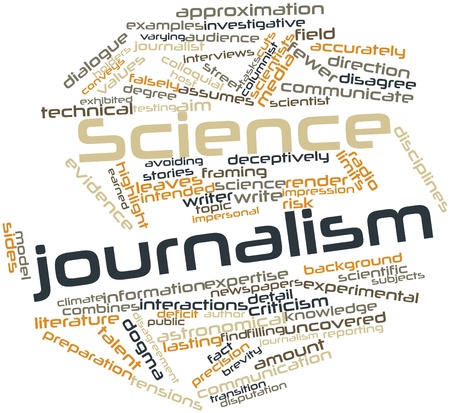 As a matter of fact, I have seen too many organisations staffed only with representatives and experts from their communities who assume they know better than their members what is good for them. They tend to forget that they serve their members, not the other way around.

Not being a science journalist, I will make sure I will cultivate and maintain direct connections with the membership, working with the Board and with members directly. Beyond having science journalists on staff or on secondment, I would also like to offer young science journalists from different regions the possibility to come and work at the Federation Secretariat for periods of six months or more. This would enrich and benefit us all.

EL: How do you see the entire science communication community working together?

CB: The Federation has a unifying role and must reflect the best of our community. Even before I became Executive Director, I was aware of expressed differences between science journalists, science writers and science communicators. At times, individuals can wear these different hats. Nevertheless, what unifies our members through our Federation is their ethics, high standards and best practices. We may decide to produce a Code of Conduct, or a simple Charter describing this. The Federation is also a bridge between our community and the outside world and we must project publicly this quality in diversity.

EL: What is your vision for the evolution of the World Conference of Science Journalists (WCSJ)?

CB: The conference is the Federation’s flagship. Every two years, it is the community of science journalists’ moment to get together, exchange, and learn from each other. We will continue to encourage more and more members from different countries to attend, through travel fellowships or other means. The WFSJ Office must also take a more active role in the organisation of future World Conferences. We must ensure continuity and foster the capacity building that exists between previous and future host organizers.

Furthermore, I believe we ought to continue opening our conferences to key individuals and organisations from outside our community. We should not shy away from addressing any topic and challenging issues that would help us all better prepare the future of science journalism worldwide. I would also like the outcome of the conferences to fuel the work program of the WFSJ Secretariat for the following two years. An important benchmark for our World Conferences was set by WCSJ2017 in San Francisco. The host organizers for WCSJ2019 are building on this, and Lausanne will also be an impressive event not to be missed.

EL: What are the most important values that shape the WFSJ?

CB: The WFSJ is coming of age. We represent a community of professional communicators and this must be reflected in everything we are and do. Our core values are therefore Transparency, Accountability and Professionalism.

US supports Ghana with strategies that promotes Diversified Economic Growth

"Encourage the use of herbal medicine" – Dr. Bright Okoh Stephen