Super Eagles defender, Leon Balogun’s debut appearance in the English Premier League ended on a happy note as Brighton & Hove Albion recorded a 3-2 win against Manchester United on Sunday, at the The American Express Community Stadium , Falmer on Sunday, Completesportsnigeria.com reports.The centre-back came in for the injured Lewis Dunk in the 20th minute and posted a fine performance in the gameBrighton were rewarded for their positive start to the game when Glenn Murray flicked Solomon March cross past David De Gea in the 25th minute. 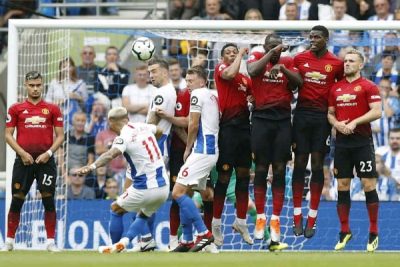 Manchester United dragged themselves back into the game when Romelu Lukaku nodded the ball home from close in the 34th minute.

The hosts however regained their two- goal advantage when Gross netted the third from the spot two minutes from the break after Eric Bailly fouled him in the box.United struggled to break down the hosts in the second half and got their second goal of the game courtesy of Paul Pogba’s penalty deep into stoppage time.